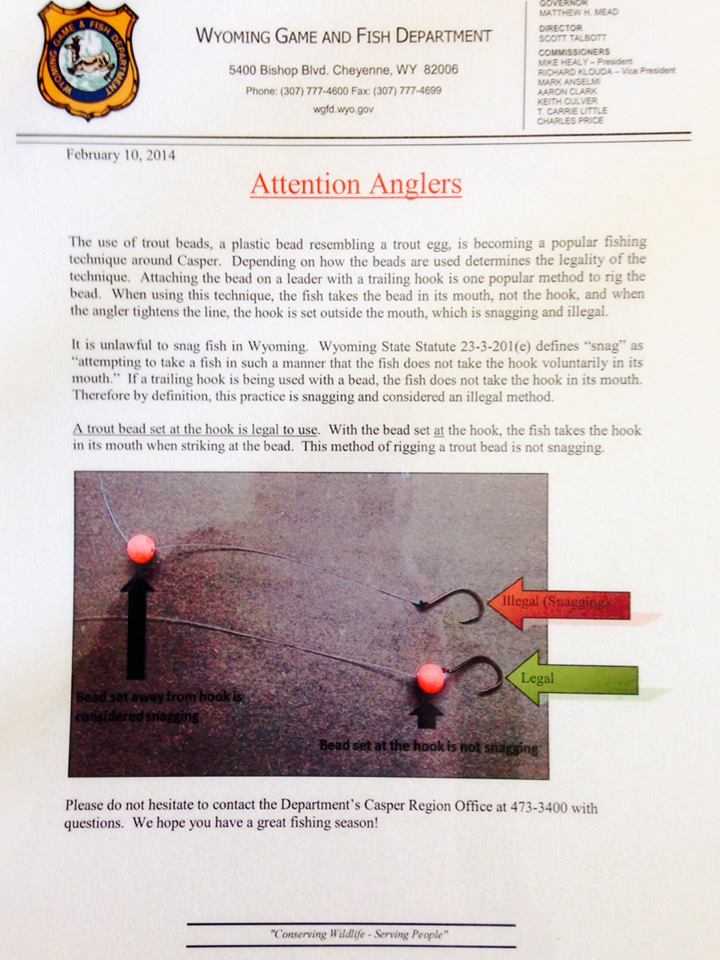 There was quite a bit of rumbling last year about the Wyoming Game & Fish regulations as to whether or not fishing beads is snagging.  On February 10th, the WY Game & Fish department released the statement (above) clarifying the rule.

As a result of this rule change, all beads must now be in with the hook when fly fishing with bead rigs. Fishing the bead 2 inches above a stinger hook is now considered snagging and can get you a ticket. For those who fly fish with beads on The North Platte in Wyoming, you know that at 2″ it gets the fish in the corner of the mouth every time. We also know that when the bead slides down up against the hook, you miss 9 out of 10 fish because there is no hook gap.  Please don’t try and use a bigger hook, it will harm the fish. Just move on.

My Thoughts Towards The New Regulations…

Troutbeads remind me a lot of the steroid era in baseball.  I remember when a 30 fish day on the North Platte River was a good day just like a 30 home run season was prior to 1998. That all changed about 7 years ago on the top of the Frying Pan when I watched a 24″ rainbow move 3 feet to eat a 6mm Gloe Roe troutbead….and so did every other fish on about every river in Colorado.   We pretty much felt like we were on borrowed time and that once everybody else started fishing beads they would become less effective. Pat’s Rubberlegs is still an awesome fly but you should have seen it 7 years ago on the Colorado River…it was stupid.  Once every boat down the river caught on, the fly became consistently less effective.

Five years ago, I don’t think there was another boat on the North Platte in Wyoming fishing beads. Two years ago, I started seeing them on other lines. This past season, I saw them on about every line.  The difference is fish kept eating them like they’d never seen them before. This really got me questioning the whole thing this past year, especially when I started seeing them on peoples lines in August.  I generally like to have a logical reason as to why I’m tying something on to the end of my line. If it’s Spring, there are eggs in the water and a bead makes sense. Once summer rolls around and there are no eggs in the water, I stop using beads.  The fact is however, beads are just as effective in the middle of August as they are in April. At that point, I don’t think fish are willfully eating your fly, but instead they are eating it as a defensive reaction to something obtrusive about to hit them in the face. I personally don’t find that to be very sporting. 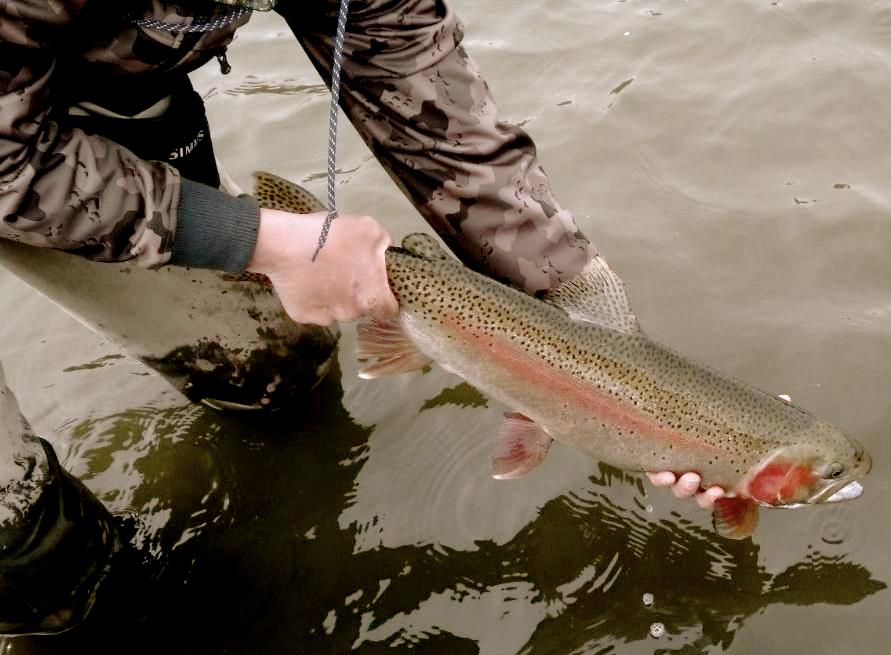 There are 9,000 fish/mile on the North Platte River in Wyoming and they LOVE to eat 365 days a year! There a ton of different ways to catch them as well.  You can fish flies suspended to match different progressions of a hatch, dredge the bottom with junk,  swing flies, throw streamers at the bank and even throw dries.  Within each of these different methods, there are a million different flies that will all achieve equal results. If you are fly fishing with a short rig during a BWO hatch, a #18 Rs2 won’t work any better or worse than a #18 Purple Jujubaetis.  If you are dredging the bottom, what the fish eat has a lot more to do with proximity to your weight then what is on the end of the line.  Ask three different anglers dredging what they caught their fish on and one might say an annelid, one might say a leech and the other might say a bead.  Ask them which fly was closest to the weight, and it will be whatever fly they caught the most fish on.  These fish eat the first thing that comes in front of their face (closest to the weight) and it really doesn’t matter what it is.

The first part of this answer serves to say, you don’t need beads to catch fish on the North Platte.  If I had it my way, there would be no boats and we would fish with one fly only using 2 handed rods. I am an idealist but I am also a realist. If that is how I guided I would not book a year in advance & I’d have exactly 4 clients. We live in an instant gratification world where we thrive on things being easier, faster, bigger & better. We don’t ask why or how, we just want results. I began this by comparing troutbeads to the Juice ball era in baseball. Say what you want about it, but TV ratings for baseball were never better than when guys were breaking records and hitting 60-70 home runs a year.  Very few people in this day in age can still appreciate the 2-1 pitchers dual or the process of finessing a fish on a small dry fly while a boat across the river has back rowed a run 10 times and doubled up on fish every time.

Where am I going with all this and how is any of this answering the question, “Are beads more effective than flies?”  The answer is simply beads are more effective in achieving the results most people desire which are misguided to begin with.  Somehow boating 70-100 fish has become the expectation for a day of fly fishing on the North Platte River. The sad reality is I’ve honestly lost clients because quote, “We had a 40 fish morning, but after lunch  he stopped backrowing, and basically sandbagged the rest of the day having us throw dries to pods of little 14 inch risers and streamers in between.”  If 100 fish is really your end all goal, that doesn’t leave much time for anything else in an 8 hour day. Beads simply allowed us to fish faster with our line in the water more often.  Fish didn’t seam to mind 0x tippet, stingers hooks didn’t bend, and beads were indestructible. No need to waste time rigging after a break off, flies falling apart or hooks bending out.

Will Less Fish Be Caught?

I can’t recall where I either read or heard this quote, but I think it sums it up nicely, “The North Platte is the most consistent year round fishery in the lower 48. It consistently exceeds unrealistic expectations.”

The North Platte will always yield numbers and sizes of fish that can’t be rivaled with any consistency anywhere else in the lower 48.  The only reason less fish would be caught is because of the time it will take to swap flies when they star to get chewed up.  I can tie knots pretty fast, so I wouldn’t be to worried about it. Regardless of this new regulation, I was already going to say that after 40 fish, we are going to switch things up this season.  If you don’t want to learn how to throw streamers, improve your casting, mending or learn how to swing flies… I can row you to the boat ramp and we can call it early.  We will not watch bobbers float for eight hours a day in 2014.

I can honestly say I’m glad that this regulation is now in place once and for all.  I know for a fact that the bead rig if setup correctly does not hurt fish and it’s not snagging.  That said, I saw some pretty ridiculous stuff this past Spring like a bead above a #8 pigsticker and a bead above all three flies on the rig.  That’s ridiculous.

What I really didn’t like was the type of fishing that beads began to foster.  Fishing the North Platte  became about the body count and not about the pursuit. When is enough enough?  After 40 fish, do you really need to catch 40 more the same way you caught the last 40? I don’t think so, and I bet you will be pleasantly surprised in how fun it is to explore the different ways these fish can be caught.