In the high country surrounding Minturn, we look for beaver ponds as prime habitat for the species of char known as the brook trout.  Native to the East coast, they were originally stocked over a hundred years ago, and they are supremely adapted to mountain conditions.  They breed so quickly that they do tend to compete with each other for food, which can both make them aggressive feeders and limited in size. 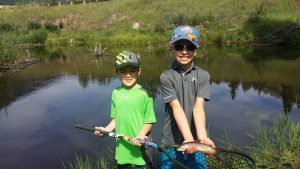 Brook trout come in many variations, but the easiest way to identify these feisty fish is by the white leading edge of their fins.  They are typically olive green, with a worm-like pattern of lighter green or yellow along their dorsal sides.  Their bellies can vary from whitish to yellow to bright orange.  They also have reddish or pinkish spots scattered around their lateral line that have blue halos, somewhat similar to brown trout.  Brook trout can actually breed with browns, producing a hybrid called a “tiger trout”, which is somewhat rare: brown trout often eat brookies instead of breeding with them.

Catching brook trout in beaver ponds is often a matter of selecting a durable attractor dry fly, such as an H&L Variant, Royal Wulff, Humpy, or other “buggy” fly.  In larger waters, try parachute Adams or other mayflies through the summer.  Smaller patterns, such as Griffith’s gnats, midge clusters, and ants collect brook trout well too.  As the water gets lower and clearer in mid- to late-Summer, longer and lighter leaders are necessary to avoid tipping off these flighty fish to the angler’s presence.  In deeper holes (such as undercut banks or under the more significant cascades caused by beaver dams), a streamer, such as a black Krystal Bugger or Bellyache Minnow can sometimes entice the “lunker” among its littler, more eager cousins. 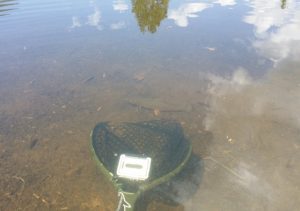