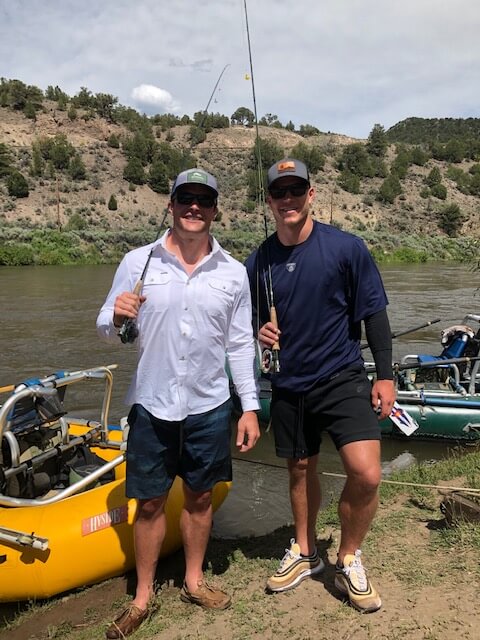 Since dropping from a high of nearly 1,600 cfs to roughly 900 cfs, flows on the Middle Colorado, between Pumphouse and Dotsero, have been somewhat variable. However, there haven’t been any sizable swings. Water clarity is variable throughout the day with the early morning and evening hours being the best. While the recent drop in flow is making us nervous for this summer (low flows & high water temps), it has led to improved fishing conditions for the time being and will likely last through Monday (5/23). So if you’re a freestone junkie, get out while the fishin’s good! The deep and slow water as well as the areas along the banks is where trout will spend most of their mornings and will seek refuge when not actively feeding. That being said, increased bug life induced by mild weather will incentivize them to move in and out of the slower riffles, seams and transitions during peak heat hours. While nymphing will continue to be the most effective mode of fishing, increased bug life induced by comparatively mild spring weather should lead to surface action making dry flies and dry droppers effective during the hatch. When nymphing, leeches, stoneflies and worms will be effective in the lead position while smaller searchers/attractors like a Flashback PT, Hare’s Ear or Rainbow Warrior will be productive trailers. Additionally, midge, baetis and caddis larva will be effective as well. As for dry flies, a Parachute Adams or Parachute BWO to a Cluster Midge, Griffith’s Gnat or smaller emerger will be a good place to start.

Want to Fish With us in Colorado River - Middle?