What a great weekend in Vail! Brandon and I had a lot of fun with a lot of our customers, friends, industry reps and other competitors in this years event.
Scores in the first round casting qualifier and second round semi finals were absolutely off the charts this year. Put simply, everybody showed up to play this year. 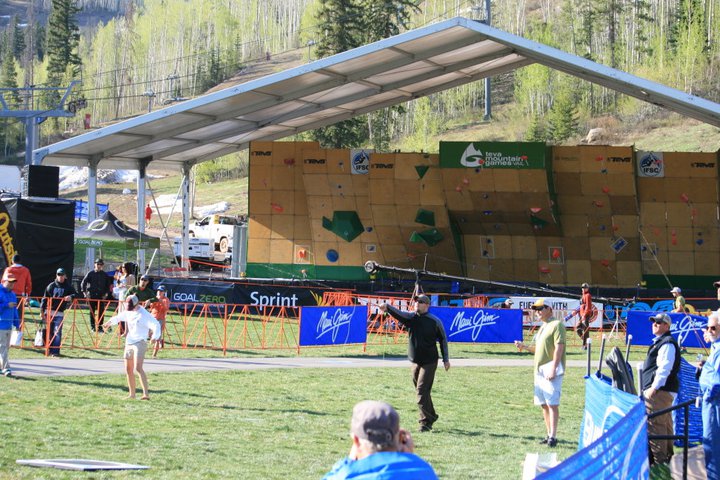 As if casting in this competition isn’t nerve wracking enough, Brandon through random assignment was the first to cast and he set the bar high hitting 7 out of 9 accuracy targets and a 91 ft cast in the distance portion. I was up 12 casters or so later and also hit 7 out of 9 with a 93 ft distance cast. We both felt pretty confident that we would be moving on, but as more and more casters continued to hit targets and throw monster casts we started to tense up a bit! Fortunately, we made the the top 20 cut and advanced to the semi-final “bridge round.” Our Scott rep Frank Smethurst was simply on a mission and hit 9 out of 9 targets a 93 ft. cast and the additional bonus target which was undoubtedly the best performance in the history of this competition.

The turnout to watch the semi-final round at the bridge was as big as I’ve ever seen it and spectators were really engaged in the competition which is super cool to see and great for our sport! Again, lots of high scores right out of the gate.  Brandon was the 5th to cast and he hit 9 of the 15 targets….or so we thought as we later found out.  Each target has 3 judges around it and on two targets we saw judges say hit and another say no.  In my opinion, if one judge sees the fly hit and calls it a score than a hit target shouldn’t be taken away. In the end, they gave Brandon 7 out of 15.  I was the 8th to cast and new it would take atleast 9 targets to get through to the finals.  After casting to all targets I had hit 9 out 15 and hit the bonus target at the end to give me 10.  At the end of the Semi-finals The cuttoff was 9 targets hit and had the judges ruled in Brandon’s favor he would have been fishing as well, but that’s the way competition goes.  Frank was the last to cast and he didn’t slow down his quest there either hitting 12 out of 15 targets putting him in first place in the semi-final round as well.

Now About the Fishing….2 Fly Final Round: Eagle River

Advancing through the casting rounds and getting to the finals is never a guarantee. Especially, in a competition like this with so many great anglers and casters. Like last year,  I spent my time thinking about just getting to the finals to fish and hadn’t really thought about the fishing part as well.

The night before the finals is always a wild scramble.  The competition allows you to choose 2 different fly patterns and you get three of each pattern.  At first, I was pretty set on three pat’s rubberlegs and three soft hackle Pheasant tails. Those are the two flies I have the most confidence in, and I felt that with those 2 flies I could cruise from nymph spot to nymph spot and scare up enough fish to give me a chance.  I talked to Bob Streb who guides the Eagle River everyday and he said bad idea.  He said if you’re going to nymph you have to go small….jujubeatis, Rs2’s, stuff like that.  He said if it were him, he would undoubtedly fish a #10 golden stimulator with a #16 X2 caddis behind it. His next recommendation was to throw streamers and pound it out on the banks.  To me it just seamed crazy to go into a competition with dry flies and fishing streamers on a bright sunny day also seamed a little risky (especially since we would be the 4th boat to launch).  Even so, I met Bob in the middle because Bob is the best guide on that river and knows it as well as anyone.  I chose to fish the X2 which I could use as a nymph under split shot or fish as a dry should fish start rising.  I stuck with the Soft hackle PT as my second fly.

In this competition we float a section of river 2 times so that each angler has a chance to be in the front of the boat.  On the first float we were the 4th boat out of 5 to launch based on how we placed in the semi-final rounds.  I remember thinking back to my days guiding the Eagle and I knew being behind other boats on that river is never a good thing.  Especially when it’s low and clear.  I was fishing with Steve Parrott and we both agreed that our best play would be to row upstream to a well known nymph run and try to make it happen up there.  Five feet into my first drift I hooked a fish that came off and I thought this was going to be good.  We back rowed the run for another 30 minutes and didn’t touch a fish leaving us only an hour and a half to complete the first float.  Being on foot and wade fishing a spot is way stealthier than being in a boat.  I could tell the fish felt our presence because with each backrow we saw fish scatter everywhere.

As we advanced down river, nothing felt right.  It was that awkward flow where in some spots the fish were so tight to the bank we couldn’t put a nymph rig in there without loosing flies.  In other spots it was a constant catch 22 between trying to hit the spots by casting towards the bank (more stealthy but only gives you 1 shot since the boat is in fast water) or setting up on the inside and casting out towards the run where it felt like the fish were underneath us.  I tried fishing the x2 by itself as a dry but it just didn’t feel like “enough fly” to bring fish up.  It really needs a big dry in front of it.  I thought about dry dropper but I was down to just one more Soft Hackle PT and I wanted to save it for the afternoon when I was in the front.  2 hours flew by and I finished the first float with ZERO fish and Steve managed to scare up only 1. OUCH!

Having seen the river after the first float, we felt that the upper few miles were not going to be as compatible to the way we were setup to fish.  We decided the best nymph water was closer to Walcott so we decided to cruise down to the lower part of the float and spend most of our time there.  Wanting to spend as much time in each run I choose to set up on the inside and cast out towards the run.  I think I brought a little to much of the Grey Reef, Colorado River mentality to my approach.  On those big rivers, there is often 50 to 100 feet between the bank and the main seam.  In a small clear river, the most I ever felt I had between the bank and the run was 10 feet.  I knew we were spooking fish.  If the rules would have allowed us to get out of the boat and nymph we might have had a chance, but in the boat we were simply flying by spots or spooking every fish. Bob was definitely right on the money when he said I should fish dries.  Giant #10 caddis were running around the water everywhere! Everybody else in the finals fished primarily streamers which I knew probably moved some fish based on how tight to the edges fish were holding.

After the two hours were completed in the second float  I landed 2 fish and Steve landed 1.  Hardly the outcome we were after, but our chosen tactic was simply not compatible to the river at the flow, clarity & from a boat.

I feel good about what I did this year in this competition.  I made it to the finals which is what I wanted to do.  I chose the tactics I was most confident in and I simply got beat.  If I would have choked in the qualifier or semi-finals, or if I was hooking and losing fish all day, I’d be beating myself up right now.  If I could have done anything differently, it would have been to have gotten on the river this week and fished it from a boat.  I would have known without a shadow of a doubt that nymphing it from a boat wouldn’t win it.  I also probably played it a little to conservative.  It’s almost as if I was fishing not to lose, but I wasn’t fishing to win. Winning a two fly competition takes a little creativity.  Perhaps a big dry fly that could have been torn apart and fished as a nymph if the fish weren’t looking up or a streamer that could have also been nymphed under an indicator if the fish weren’t chasing streamers.

If it Wasn’t a Competition…How Would I  Fish the Eagle Tomorrow?

On any other day, I wouldn’t even entertain the thought of an indicator. The Eagle is made for dries and streamers this time of year and I love seeing fish chase and eat a fly.  I would fish streamers in the morning and really work the banks and pockets.  I’d lead with an articulated Olive/White Double Bunny and trail it with a Thin Mint Bugger.  Once I start seeing caddis I would switch over to dries.  I would tie on a #10-12 Stimulator with a #14 puterbaugh caddis behind it.  I would cast it an inch off the bank and skate it out to the seam and than cast back towards the bank. On the day we floated  the fish weren’t actively rising but  I saw other guys on the river hitting fish on dries which tells me the fish are definitely looking up.  I am definitely going to get back up there this week and go have some fun with Bob and the boys at Minturn Anglers!