Gore Creek is still significantly above its usual flows, but it has returned to low-and-clear conditions after a period of rain.  The focus is on BWOs and midges, with an egg or smaller stonefly as a good lead fly.

Gore Creek is usually flowing at about 30 cfs in October.  It usually runs at temperatures in and around the high 40s, but with significant swings as the wider upstream portion is exposed to lots of sunshine through the last part of Vail’s Indian summer.  This year, the temperatures have dropped as usual, but the consistently high rainfall has maintained the creek at almost double its usual volume.  The extra water all season long has   The colder temperatures mean that there’s no need to rush out of bed and get to fishing until the sun warms the water a bit. 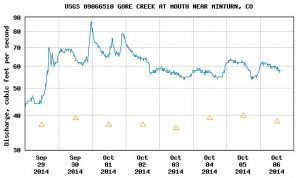 The little friends we try to imitate are temperature dependent, so as the water falls to the upper 40s, the strong summertime stonefly and mayfly hatches have given way to our little wintertime saviors, the midge and the blue wing olive.  Since the water is not as low as usual, 6x is probably as thin as you need to go, but be ready with the flourocarbon for any bug puppets you plan to drift subsurface.  Also, leave the big Thingamabobbers at home and use a small indicator or dry-dropper.

In the section above the Vail golf course, you may get some swipes on a tan or orange caddis (or even small stimulator), as there are fall caddisflies moving, but the greatest likelihood is that you will see action on size 18-24 parachute Adams, midge clusters, extended body BWOs for dry flies.  Barr’s BWO emergers (#20-22) are always a good bet, followed by olive, black, and cream midges.  Brassies have also been getting some looks.  Always pack an ant pattern (dry or drowned) before there’s consistent snowfall.  In the lower section, you will be more likely to find action just on the nymphs/emergers.  Try a soft hackle PT or caddis (like a Z-wing) with a bead for depth, followed by the BWO-midge combo, in sizes 18 to itty-bitty.

If the creek doesn’t work for you, there’s still some action on the pond just a short walk down the bike path from the East Vail interchange.  They’ll readily take midge clusters/renegades/Griffith’s gnats and little attractor beadheads, like rainbow warriors and copper Johns.