May is for love. August is for scuffling and fighting your way through the maze of thunderstorms, warm water, waning bugs and high skies.  For a guide, the dog days of August are just about putting your head down and keeping moving.  Fishing can be frustratingly tough and amazingly beautiful at the same time.

Just the other day I had a couple from Florida.  Morning started out at about 42 degrees and the water was a bit off color when we first got wet at about 7:30 am.  Had a few eats and one in the bag in short order, but then BOOM, the water goes off-color.  So much so, that we had to move upstream. We battled for about a half hour after our move just looking for feeding fish.  Finally, I dropped into a stretch I’d never fished and BANG, we doubled up on a fine pair of Browns. Tough and beautiful.

I’m pretty stubborn when it comes to bug selection and the nymph rig in general.  The tougher the fishing gets, the more I dig my heels in and attempt to beat the fish by tiny, subtle adjustments to rigs and fly choice.  I run my basic rig, whereas a lot of fly fishers increase leader lengths and go to smaller bugs, I stay with my usual lengths and usual sizes, and strive to refine speed and depth when nymphing.  I try to match and stay ahead of the hatch as closely as possible, and I’m always looking for that third bug.

What’s the third bug?  It’s simply my money bug in any rig (Colorado it’s legal to use 3 flies).  The first two droppers of my rig are the meat and potatoes of the rig.  The third bug, now that’s the bug that’s supposed to be deadly.  In August it’s hard to find that third bug.  Referring back to the trip with the Florida couple, we caught fish on San Juan Worms, Mercer’s Golden Stone, a Soft-Hackled Pheasant Tail, and lastly, the third bug.  The third bug did its job, but not with as much zest as I need in a third bug, so it’s off to the fly tying bench I go to make a few adjustments.

My third bug often is a cross-over fly.  In other words, it can mimic or represent a couple different bugs in the drift.  For about the last five weeks, that bug has been the “Yellow Suzie”. Suzie was named by a female client that forgot that the fly represented a Yellow “Sally” Stonefly, and mistakenly called it Suzie.  The name stuck.  Suzie also represents a Pale Morning Dun (PMD) emerger AND a Caddis pupa all rolled into one.  Very simple, deadly and “Filthy” bug as a young man said.  I guess in this case “Filthy” is a good thing.  Whatever happened to “sick”, “phat”……..”Awesome”?  Oh well, if it’s filthy, I’ll take it. 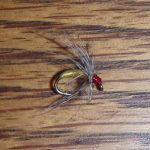 Sadly, Suzie wasn’t rockin’ the river last week like she was and she will need to step aside for another bug to give it a rip.  Oh she caught a few, but my third bug needs to produce, so she may be in mothballs til next June.  Now it’s time to sit down and tie a few patterns and give ‘em a shot on the Eagle as the dog days of August rage……….It’s gotta’ be part soft-hackle, part nymph, part emerger, perfectly sized and colored,  can be dead drifted and swung, and most certainly needs to be……………. filthy.