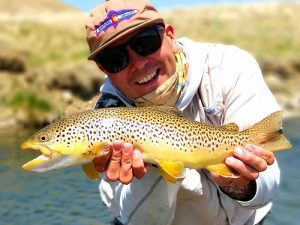 Every now and then (more often than I would like to admit), I find myself in the middle of a frustrating day on the South Platte. After throwing seemingly EVERY single pattern in my box and seeing no results, I start to wonder if I am wasting my time, losing confidence in my angling game and even questioning my sanity and very existence on this planet. We all have these days and most of the time it’s something completely out of our control, whether it’s flows, water temps, weather, turned off fish or just plain bad luck, they are hard to avoid and even harder to power through.
I have spent many days on the water learning how to adjust my depth, speed, presentation, fly selection and a million other obstacles that could be standing between me and that huge fish that seems to be mocking me from the bottom of the river, so times like this are an extra heavy blow to my fishing ego. If you are like me, you can feel my pain and the struggle can be all too real sometimes. I found myself in the middle of one of these situations last week, one day after a big rain storm, with three other skilled anglers and an entire day of struggle. The fish were few and far between, our nets had been dry for quite some time and morale was at an all time low.
Just as I started to think we might be calling it a day to lick our wounds over a beer or ten, I noticed something huge and ugly in one of my boxes that I hadn’t thrown in quite sometime and had almost completely forgotten about, it was a crane fly larva. I decided to tie one on almost as a joke and lob this beast of a pattern out into the depths of a run where I could see several fish lined up and feeding. As soon as my first cast hit the water, BAM, I had a large brown trout on my line and the fight was on.
After bringing the fish to the net and celebrating what I thought was probably a comedic fluke, I proceeded to hammer large fish after large fish as my jealous counterparts looked on in anger and sheer amazement. I couldn’t believe that almost every other cast granted me another fish in what had seemed like a dead, unproductive run. This day completely changed my perspective and granted me some new insight on what was actually happening on the river. 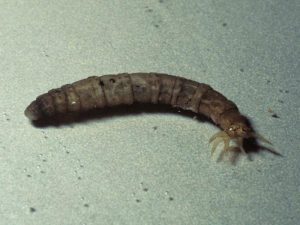 Without diving too terribly deep into an entomology lesson, let’s talk about a few important things to consider when fishing with crane fly patterns. Adult craneflies resemble giant mosquitoes and are commonly referred to as “Mosquito Hawks” belonging to the Tipulidae family. Although size is largely variable among the many species, their general body color is brown and a prominent V-shaped suture occurs on the thorax between the wings.

Larvae typically can be found in abundance living in moist soil near streams, waterways and ponds and resemble thick skinned maggots with no distinct head area.

Crane fly larva are scavengers that feed largely on decaying leaves and plant matter, so it’s no secret that the mossy bottom and plant rich banks of the South Platte can be a perfect habitat for them to thrive. Adult emergence will normally occur during the late morning hours and is most common in the spring and early summer. The exact number of crane fly species that can be found in Colorado is unknown but is said to likely be in the hundreds. 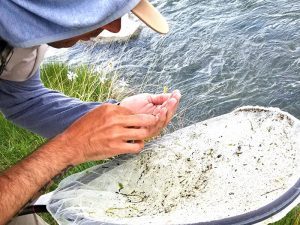 Since almost all crane fly species live near the water and not in the water, it can be very productive to fish crane fly patterns in the days following rain storms or significant bumps in flows. Rain storms and flow increases tend to knock these clumsy critters into the water and into the feeding path of hungry fish. Typically you will find crane flies near the banks where they live and are swept away from, as opposed to the middle of the river, but it is definitely not uncommon to see results in the center of the river in deeper water while dead drifting larva patterns under an indicator. Since crane flies naturally live near the shore, fish that are feeding near the banks will no doubt be more used to seeing them in the water, so that’s a great place to start.
Having no natural ability to swim, crane fly larva create an excellent meal for that big opportunistic trout that doesn’t want to expel too much energy for a large snack. Although I rarely use dry crane fly imitations, and have generally seen larva patterns to be much more effective, using dries in the right circumstances can be a lot of fun. Adult crane flies are most active during warm evenings in shady bankside pools near deadfall and overhanging vegetation. Skating your dries around these areas can show great results, as the adults are clumsy and wobble on the water where they land occasionally. Definitely place more emphasis on conditions as opposed to presentation, more concern should be placed on the “when” instead of the “how” when fishing with crane flies. 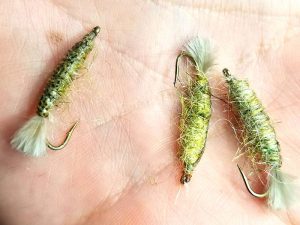 Crane fly larva are extremely easy to imitate because they are basically a large greyish brown or olive colored maggot.
Several good patterns can be found for purchase and tying these critters is easy and very basic, just bring plenty of yarn. #12-14 crane fly larva is a great place to start and most other larva patterns are very similar to each other so you really can’t go wrong at your local fly shop.
As far as dries go, a #12 “Daddy long legs” can be deadly on the top water and there are many other “Adult Crane fly” patterns to choose from out there. My rule of thumb is “less is more” when it comes to all crane fly patterns, wet or dry.

In conclusion, I can’t tell you how important it is to try some new tactics when things get tough on the water. We all have our “secret weapons” on the river, and the crane fly larva is no exception.

It’s always fun to be throwing something unique when everyone else is stuck on rubber legs, worms and other attractor patterns that fish have seen day in and day out, season after season. In the early summer months, I love to throw a crane fly larva as my top bug with a Stalcup’s baetis and a mayhem midge behind it, its large size and heavy weight allows it to sink fast with little or no weight and can be a real killer out there. Remember to look in the water and pay attention to unique situations that might call for secret weapons and alternative tactics, it just might pay out huge dividends.

Feel free to stop by either of our Minturn Anglers locations for more information on these and many other flies that may help you strengthen your game on the water and don’t be afraid to stay a while, tell some fly fishing stories, book a trip, grab some gear and pick our staff’s brains on all things fishy. We won’t steer you wrong. Tight lines and bent rods!!