The point of this short rant & blog is to say, “challenge yourself to  step outside the box of what’s comfortable & what feels safe.”

The last time I competed in the GoPro Mountain games, I was coming off a win the year prior & can vividly remember asking one of our senior guides Bob Streb what I should throw in the two fly competition.  He said, “Two big dries & have fun!”  HA!  “I’m not fishing to have fun, I’m fishing to win a competition.”, I replied!  The following day, I remember seeing miles upon miles of juicy stream banks stacked with fish willing to eat anything that floated. Unfortunately, I had a bobber & two nymphs. Shoulda’ listened to Bobber!

The Eagle River runs behind our shop in beautiful Minturn, CO. Above the Eagle River is a power line, and behind the river is a narrow one way alley leading to the backdoor & garages of businesses in downtown Minturn.  Wrapped around the power line are 50 or so birds nests made of tippet, leaders, fly line & lots of $2.95 hoppers. Yup, I put em there Kevin Costner style! 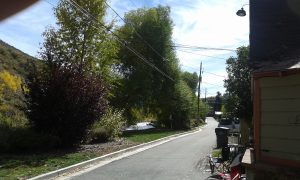 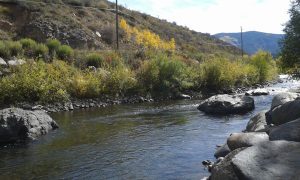 During my five minute escapes from answering the phones inside one of the busiest fly shops in the country, the fish on the opposite bank became slowly acquainted with Amy’s Ant.  So did the neighbors in the nearby stores & houses who learned to look twice before exiting their backdoor. Were there plenty of fish on the near bank? Well yeah, but what would the fun in that be? Instead, I wanted the 50 foot shot down and across to the fish on the other bank just below  the overhanging tree branch.  There were two cast which would get it done without wading…

If I got sloppy on the back cast, my fly was in the power line and I was asking Bob for another one.  If  blew the anchor on the single spey, the fly was in the bushes, guaranteed.  If I actually managed to get the fly wet,  there was about 1 second of drift before the fly would drag and swing into the boulder in the middle of the river littered with tree branches. Avoiding this mid-river obstacle then required a  50-foot pickup into a  tight backcast in order to keep it out of the power line. Over the course of a month, I became better at keeping the fly wet and out of the bushes, power line & dogs’ tails about six out of ten times.  A monumental achievement given the lay of the land, but what is a good cast if it doesn’t catch a fish?  The problem was, I just couldn’t buy enough drift time to give a fish in a deep hole time to come off the bottom and eat the fly.  A steeple cast, reach mend or any other type of down & across presentation just wasn’t an option.  Then Enters Innovation Out of Necessity. So, I developed a new cast/presentation. Or so I think…bottom line you are not going to find what I’m going to describe in any  Joan Wolff book.  I call it  the “line drive cast.”  The thought processes/imagery of this cast is as follows. Throw the fly so fast that it dives to the bottom of the river and touches the boulders. This isn’t possible, but it’s your goal.  Meanwhile, you need about an extra 15 or so feet of line.  What I found is that if the fly  and leader hit the water hard enough, it creates a “reverse anchors” that will allow the remaining 15 feet of fly line to continue to traveling beyond where the fly landed. This sets up a perfect reach mend/pile cast right behind the fly & buys a few good seconds of drift.

For the Fly Tyers…

Three steps starting with the right. That’s incorrect; do it again! If you asked any position player who played baseball at Belmont University to name that coach, the answer would be Coach Jason Stein.  Coach Stein demanded perfection, from the simplest things, such as how many steps we took on a leadoff from first base….and he counted them! It seamed silly at the time, but thinking back, it was brilliant.  How could we expect to do the hard things consistently well, if we couldn’t even do the simplest things, like take the correct amount of steps off of first base?!  I think about this a lot these days, especially when I tie flies.  When I set out to learn a new pattern, I take a commercially tied copy of the fly and I put it on a second vise.  I complete each step of the fly so that the finished product looks exactly like the commercially tied version. If my forked biot tails aren’t even, I do it again.  If my dubbing doesn’t make a smooth taper, I do it again.  The first fly might take me an hour, but guess what?  Instead of tying 12 flies to master each step, I only tied one fly.  By taking the time to redo each step, I master each step in just one fly.  Good fly tying is repetition and willingness to learn how to do each step correctly. If you force yourself to tie perfect flies, you will naturally find that you tie only near perfect flies because you only know one way to do it, the right way!

The underlying point in this I hope should go without saying, but I’ll reiterate what I think I was trying to achieve in writing this. If you think you’re suddenly too good to fish the little creek behind your house, fish it in a way where the creek suddenly owns you. Make casts to the impossible spots, with flies you tied to perfection.  Don’t be afraid to throw the fly into the power lines & ask “Bob” for another one. In doing so, I promise you will constantly find ways to keep fly fishing fun & fresh.  You will also be all the more prepared to make the heart thumping cast to the fish of a lifetime in the hard to reach spot when the opportunity presents itself.