Happy Presidents Day! We hope that you’re spending your day off work by chasing some trout. There is really no better way to honor the holiday than to spend your day knee deep in the cold water of your favorite fishery. In fact, So many of our presidents From Teddy Roosevelt to current presidents  have worked hard to ensure we have the access to public  lands so that we may peruse our passion. More than a few of our Heads of State have also enjoyed nothing more than a good trout stream and hungry fish.

In honor of Presidents day we wanted to pay homage to just a couple of the Anglers who have inhabited the White House. Most recently President Obama got out and chased a few down in Montana and while he’s not an avid fly fisherman it was pretty clear from the pictures that he had a pretty good time waving the rod around.

Our 41st President, George H.W. Bush spent countless hours on the water chasing all sorts of species with a fly. Bush could be found chasing trout in Maine, strippers down the east coast, and even giant tarpon down in the Florida Keys. Most notably the President landed a 135-pound tarpon in Florida and that’s not an easy feat for any angler. 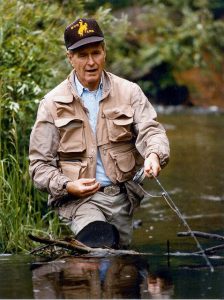 Stepping back in time a little bit President Hoover was possibly the most avid angler of any to ever be Commander in Chief. Hoover wrote books on fishing and found peace on the river like no other place. The President was most fond of the dry fly and could be found chasing down a good hatch whenever he had a spare moment. Hoover even pioneered a camp which he envisioned future presidents would come to find solace and enjoy the splendor that is the river that flows through the camp. To quote the President “All men are equal before trout.”

Finishing up our list is John Quincy Adams who had the benefit of living before cameras so we have to just go ahead and take his word on all the fish tales of his. While his adventures on the river are not well documented it is agreed upon that he was an avid angler and who also had the pleasure of chasing fish in our country before it development and before we had the opportunity to tamper with the natural beauty of the rivers and coastline.

So get out there and spend presidents day the way that a President would. Layer up and get out there on the river. If you need any assistance on where to go and what to throw swing by the shop in Lone Tree or Minturn and we will point you in the right direction.

See You Out There