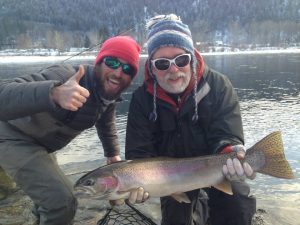 Three years ago, my son David invited me to the Salmon River in Pulaski, New York to fish for steelhead.

On our 1st day, i used my trusty spincast reel and we basically floated the whole day but got skunked. So the next day, David suggested we just go to the “fly zone” and I can try fly fishing. That was my 1st time that I put a fly rod in my hand. To add a bit more challenge, the 13 foot spey rod was all that was available for me. I quickly learned a roll cast and just planted myself on a huge protruding rock and began my steelhead hunt. On the 3rd cast, I got a huge take which I immediately set and hooked up. The reel immediately started whirling. I finally slowed it down and try reeling. David kept screaming ‘give it some line and don’t reel it in until it tires’. But the excitement go a better part of me and I kept reeling instead of maintaining a tight line, releasing line when the fish started running away, and stripping the line. So the father did not listen to his son and the ‘big one got away’. I’ve been hearing how i flubbed this potential big catch ever since.

So this year, David invited me to join him on a destination trip with Minturn Anglers in Kamiah, Idaho to try my luck fly fishing for steelhead again. It was also to be spey rod fly fishing too. This time I promised I would listen to his every instruction. I was determined to walk away with a trophy. When we flew in, we found it unusually cold and snowy. Ironically, the weather was very similar to my Pulaski trip in NY. We got to the Lewis and Clark Lodge. A very quaint series of cabins which reminded me of the hired help residence in Dirty Dancing movie. It was the perfect setting for this trip. We met up with other guides from Minturn Anglers and planned out my next two days. It was at this point that I was assigned a guide; Alex ‘G’ Garnier. He seemed very professional and knowledgeable in fly fishing while David learned to row Idaho water.

Next morning, after a hearty blueberry pancake breakfast, we set up to trailer our boats to the North Fork Dam on the Clearwater River. We chose that area because most of the river was frozen and with water released from the dam, it would warm up the next several miles so that we could fish. Once in the boat, Alex just started educating me in spey casting, mending and how to set the hook and land the fish. ‘Mend’ was the popular word of the day. I learned multiple ways to mend and felt rather proud of myself. I also quickly found out that my casting was hopeless and the iced up rod guides did not help either. To help with casting, Alex spent some quality time teaching me the water haul casting method. It took a while to get it but with a few drifts under my belt, I started casting acceptable distances rather consistently. Armed with the new fly fishing skills, we were finally ready to do some serious fishing for steelhead.

With the limited open water, we opted to stay by the dam and repeat 1/2 mile trips while interchanging fishing lanes with David and his rowing coach Eric Wilcox. Eric is quite a character and I’ll save those details for another time. Initially, I got a couple quick serious hits which made me feel optimistic. We got some beautiful drifts going but the best I could muster was a 10 ” White Fish. While in the other boat, it seems like they were pulling in fish every 20 minutes. At one point, Dave caught a 32″ steelhead which pumped us to go for more runs. However, we did beautiful long drifts with “perfect” mends but to not avail. The sun set on us and we had to call it quits. It was a very good day for me learning the spey rod basics. More importantly, it was a float day without getting wet and despite the cold weather, the muck boots kept my feet warm and Rosie’s Peruvian hat kept my head warm and stylish! 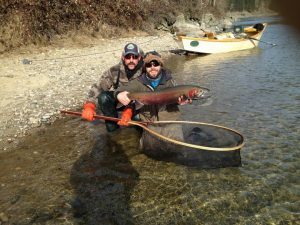 The next day, our group started the day with our traditional breakfast of champions; Spam and eggs. This time, I was ready to pound fish. Again, we all went to the dam but planned to float downstream since the warmer weather cleared more river for us. Just before we started our drift, Alex repeated all his pointers on setting hook, landing fish and mending. You might think that this repetition is way too much, but for me it was what I needed. So we started drifting down river past new holes and fishing opportunities. This time we saw many fisherman fishing from shores. From the looks of it they were catching a few too. But Alex and I just went up and down, casting into the seams and getting really fine drifts…. but no fish. While in the other boat, David and Eric where reeling then in; cutthroat, chubb, whiting and steelhead. When David caught his 4th one, I felt that I was next. David and I are at a 4 to 1 ratio now a days. 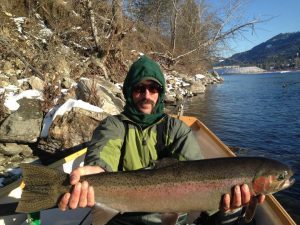 We kept repeating our floats but the day was slowly winding down. We had but 45 minutes to sunset. I finally got to the point of setting line every time the indicator went down. But this time, there was a fish pulling on the other end. Really did not feel huge but strong enough for the reel to whine. Alex was surprised and cautious and kept asking if it was a fish or did I catch bottom. i turned around with a big grin and said this is a real one. Quickly, Alex started instructing my every move; keep line tight on my side, leave him some line if it wants to run, don t raise the rod (this is not trout), etc. YES, I did follow all instructions this time. The fish was not quitting. The moment I stripped it closer, then it decided to run again. We kept repeating this for what seemed like forever, but I finally brought him close to shore. I could not get close to the boat because the leader was 15 feet so Alex went to shore with the net. After a little more struggling, we netted a 30″ steelhead hen. The colors were very pale which indicated a recent migration from the ocean. David jumped from his boat and joined us for a glorious few minutes.

That is when David said “Papa got his candy bar!”. Then we followed the landing with an extreme photo shoot and lots of fish tales. I’m surprised that my steelhead is only 30 inches at the end of this report! 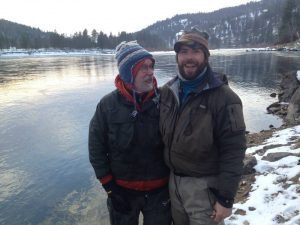 This was an awesome trip and I want to thank Alex for his relentless guidance and instructions. That is what a fly fishing guide does and he did it very well.