Here in the Land of Trout, Dreaming of Saltwater Fly Fishing

8-1-2014 Trout season in full flow, lots of fish caught, many tales of the one that got away, however my mind regularly thinks of home and of all the fish relaxing tails up in the knowledge that I am 3,000 miles away.

As with many fly fishing guides, my life follows the seasons. 12 years ago I made the decision to make my base where the season is longest and allows me time to fish for trout and salmon during peak seasons elsewhere around the globe. My home is now the southern Yucatan peninsula, Mexico from October through April. The village is called Mahahual, population 1,000, elevation 1 foot 6. This is also the HQ of Minturn Anglers trips to Banco Chinchorro (the world’s second biggest atoll), guided saltwater fly fishing trips and guide school.

I write this post to disprove a few myths about catching target saltwater species on a fly rod. Many may think that to catch a Bonefish, Permit, Tarpon or Snook you need to be stood on the front of a $4,000/5 days skiff in the middle of nowhere having traveled with your fishing buddy more than a day to get there and after spending $3,000 on equipment for your first trip. 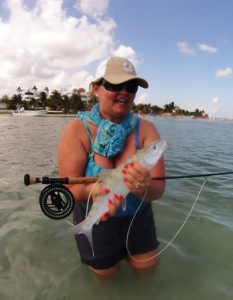 Many anglers have had to tighten their belts financially (presumably largely after pressure from the spouse) and now look to take a holiday in a place suitable for the family with an option of some fly fishing. A break away with one or two days guided plus some do-it-yourself fly fishing in a tropical location with a happy family included! Since the publishing of Rod Hamilton’s book DIY Bonefishing, achieving this has now become straight forward in some of the most desirable destinations for fly rodders. Rod’s book deals largely with cost effective travel and accessing flats on foot. This blog post applauds Rod’s lengthy research and excellent book, but I would also like to add that you can find fish in less remote areas. I have often spotted Bones and Permit tailing, Jacks charging baitfish, Cuda strikes etc. etc., all from a restaurant or bar in our village…. It drives my wife crazy when my eyes are elsewhere! 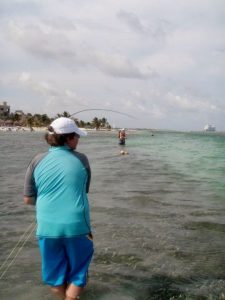 Fish that live in a populated area are coexisting with humans to their benefit. After losing the fear of the sound of an engine or someone swimming nearby, many species associate this with a feeding opportunity. A company of Jet Ski rentals, who warm their machines up before the tourists emerge, inadvertently stir the substrate temporarily suspending crustacea in the water column or by uncovering an extra inch of sand can take the predators nearer to the prey usually safe in its burrow. Just this spring, I watched three juvenile Permit  studying my nephew’s feet as he played just a few yards from the shore.

I have taught some 600 people to saltwater fly fish in the last 5 years, no need for a boat, simply walking and wading in a small fishing village. On the first day trying around 75% of these catch their first Bonefish this way. Aside from Bonefish many other species will grab a fly in the ocean when blind casting from the beach its common to catch colorful Snapper and Jack species which will all put up a good show on fly gear.

The ocean should not be feared as a huge body of water. The target species for fly fishermen are largely all in the edge. Simply look for habitat types for example, Bonefish feed and school over sand, Permit tail on rocky points where the reef or deep water are close by, for predators like Tarpon and Baracuda look for baitfish and they won’t be far behind. Large areas of sardines held against the coast by fish are easily noticeable by feeding birds diving on them. Once you have found an area that holds fish look for other similar areas nearby and apply the same tactics.

If you don’t own an 8 weight rod and can’t borrow one, take your 6 weight. So your reel isn’t saltwater proof, wash it thoroughly after you use it (I’ve had cheap fresh water reels last three years with terrible maintenance). Your fly line is a fresh water one, so it will be a bit softer in the hot water but it won’t break! Buy some stiff Fluorocarbon in a few different strengths and a handful of flies suitable for your destination and you are on your way to furthering your fly fishing achievements/bucket list a lot easier than you think.